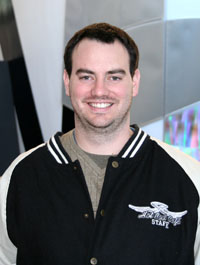 Area of MS research: With the technology advances in the last years input devices like keyboard and mouse are not longer enough. There is a increasing need for more natural means for interaction between the user and the computer. Multi-touch devices and computer vision application are making possible the interaction through gestures. In this work the triple problem of finding and tracking the user hand, recognizing the pose of the hand and the rotation angle of such pose have been addressed. Using a 3D image input device like the ZCam a set of classifiers implemented as support vector machines (SVM) and trained with the sequential minimal optimization (SMO) algorithm is proposed as a solution for the triple problem. All three classifiers were tested with an independent testing set and proved to have a very good performance. Furthermore, the same feature set was used with different classification algorithms and compared with the original SVM-SMO classifier. Consistently, all classifiers performed well but the SVM-SMO has always been among the best. Additionally, considering that the key for performance on SVM algorithms is the kernel with which they are implemented, several kernels where tried and compared. Although most of the time the performance of the more complex kernels outperformed the original one the processing time was much bigger. Finally, an application was developed using the previously introduced classifiers to work as an input device in the Sparsh-UI multi-touch framework. This applications has the double benefit that allows applications that required a multi-touch hardware to work with a simpler hardware and that integrates touch and computer vision technologies opening the door to more integrated solutions in the future.

What HCI classes were invaluable to my success?
I particularly enjoyed HCI 575X and CS 572, CS 573

HCI issues that interest me: Design of UI that would maximize affordance and minimize learning curves. Extend common interactions to some other more natural like gestures.