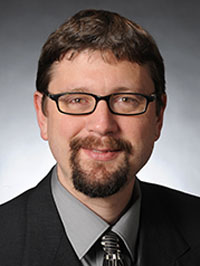 Background:
Michael Dorneich is currently an Associate Professor within Industrial Manufacturing Systems Engineering (IMSE), with a courtesy appointment in Aerospace Engineering and is also an affiliate faculty member of HCI. At the University of Illinois, Dorneich completed both his bachelor's and master’s degrees in Electrical Engineering, as well as a Ph.D. in Industrial Engineering. The reason for his shift in his field of study was due to a doorway between his MS and Ph.D. where he discovered human factors. Dorneich’s path to HCI started with a literal and metaphorical doorway of opportunities, filled with posters and ideas of people and technology working together to enhance our world. Coincidentally, it happened to be the door of his future Ph.D. advisor. After graduating and completing his dissertation, he worked at Honeywell Laboratories doing research, with patents as a by-product. In the midst of his time there, he realized that training new members was actually the most enjoyable part of his job. The most pivotal moment in his career was, “Standing in front of that professor’s door and then making the switch; it changed the trajectory of my life.” Since undergrad, Dorneich knew that he wanted to spend some time in industry and then return to education long-term. Though his original plan was to only stay out of academics for roughly five years, he commented, “It of course quickly turned into seven, and then ten. And before I knew it, I was thirteen years in and still loving my job. For a while I wasn’t sure if I would leave at all.” Then, in 2012, he was approached by Iowa State to become an Associate Professor. He knew that this was the opportunity he had been hoping for since his early college days and took the career leap. When asked what his biggest success has been thus far, he responded, “Career-wise, it’s that I am doing what I want to do. And I attribute that to education: undergrad has some control, a master’s has more, and a Ph.D. has the most. Through the combination of those degrees, I have had control over what I want to do, and what I want to do is exactly what I am doing.” In his time at ISU, he has worked closely with the HCI program in the context of Industrial Engineering. His dissertation was on how to use virtual spaces to help people collaborate with each other. “Then my work expanded to focus on humans collaborating with autonomous software agents.” He has looked at how to hand-off roles and tasks between humans and technology, as well as decide what’s best to do in any number of critical situations that may arise. This focus has appeared most within his aviation work with pilots and astronauts, but also within collaborating with others. He noted, “I really like working with people, students and other professors. My research area is collaboration, so my door is open! If you want to talk, I am here to be helpful.” His advice for current HCI students: “Follow your interests, pursue your passions. It sounds cliché, but just keep exploring, talking to people, and getting as many experiences as possible. So travel, discuss, try out different projects. Actually doing it will let you know pretty quickly whether you like it or not.” If you wish to contact Dr. Dorneich, you can reach him on his website.