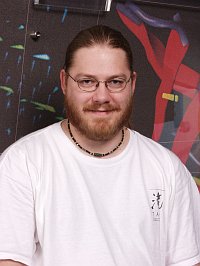 Background:
Jesse's double major in computer science and mathematics enables him to target his specific research interest: robotics. He imagined that there were two means of becoming involved in robotics, either become an engineer and work on robot bodies, or be a computer scientist and work on robot brains. Jesse chose brains. In fact, Jesse's research interests span many different aspects of robotics, such as kinematics, machine learning, and robot vision. He is especially interested in self-organizing systems and their application to robots. Jesse is currently working with Dr. Greg Leucke to construct a small autonomous vehicle to use in research on robot vision, localization, and other areas. Jesse hopes his research will add to the capabilities of robots as a whole; thus, as robots become more capable they will become more ubiquitous and more helpful. Aside from his professional goals, Jesse plans to raise his two daughters (hopefully to love math and science) and to pursue an advanced degree in ISU's HCI graduate program.