Working in teams is becoming increasingly important as it gives the ability to achieve goals that would otherwise be impossible individually. However, there is often not enough time or resources available to run live, complex team-training scenarios. New systems involving team-based learning and simulation are needed. Intelligent tutoring systems provide a solution to this problem. With an intelligent tutor, there is no longer a need to keep skilled trainers or coaches on hand, since all instruction and correction is handled directly by the system. In addition, the tutor would be able to provide accurate real-time, personalized feedback to each individual on a team. To that end, development of the team Intelligent Tutoring Systems (ITS) and the Team Multiple Errands Test (TMET) began at the Virtual Reality Applications Center (VRAC) sponsored by the Army Research Lab (ARL).

The team ITS project is focused on applying the concepts of intelligent tutoring in a team-based military setting. As stated in The Army Learning Concept 2015 (Dempsey, 2011), “the Army must move from individual-based and instructor-delivered learning to team-based, facilitated learning.” By using an intelligent tutor to guide learning, the instructor’s time is freed up for higher-level guidance while trainees receive the same level of individualized feedback expected of a trainer. To meet the military’s need for team-based learning, an ITS is being extended to work with an entire group of people. Thus, all members could be actively monitored, and intricate team scenarios could easily be repeated at little extra cost.

To create the software infrastructure behind the team ITS project, the Generalized Intelligent Framework for Tutoring (GIFT) is used. This framework is a powerful software architecture designed to support a wide variety of intelligent tutoring. As mentioned in its title, GIFT does this generically so a wide variety of learners can manipulate and utilize a customized interface. However, GIFT does not directly support teams. In order to develop a robust team tutor, a large amount of work is going toward understanding how to select a team instructional strategy, as well as finding a balance between individual and team feedback. Seen below is a screenshot of the GIFT framework in action. 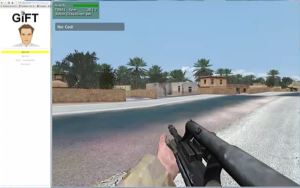 To better understand what kind of teams and tasks work best with an intelligent tutor, the team ITS project aims to research, create, and document team tutors for different team configurations and kinds of tasks. This can be very difficult when considering the wide spread of possible team structures. Moreover, each unique team could potentially have a different reaction when presented with the same task. Currently, one task has been designed to test a team’s ability to work together and communicate. This task utilizes a team of two people, each located at a different vantage point. As opposing forces move around, the team is responsible for identifying the opposing forces and communicating their movements with each other. Throughout the scenario, feedback is offered in order to improve team performance.

Outside the military environment, ISU is developing a Team Multiple Errands Test (TMET) that will provide another framework for investigating team performance. The original Multiple Errands Test (MET) is a standardized test that evaluates an individual’s performance on everyday tasks, such as shopping. The basic principle behind the test is to give an individual a large list of common tasks and rules. For example, an individual may be asked to retrieve three items, but can only purchase one item at any one store. In addition, the individual may need to stop for lunch with a friend in the midst of shopping.

For an intelligent tutor to be effective, it must know what to say, and when to say it. The TMET system aims to determine the right kind of feedback to present, and under what conditions it should be given. There are a number of different aspects to consider when choosing what feedback to offer:
1) Who should receive the feedback? Which team members would benefit most?
2) Will the feedback go to an individual or the entire team? If it goes to the entire team, should a specific person be called out?
3) Should feedback be visual or spoken?
4) When will the feedback be given? Is it more beneficial to receive feedback before, during, or after a scenario?

By extending the MET to work in a team setting, participants must communicate and work together to efficiently accomplish all necessary tasks. In the current scenario, groups of three participants are asked to retrieve a collection of items needed for a surprise birthday party as quickly as possible. Each participant uses an individual computer in a separate location, and a two-way audio channel is opened between all participants. Each participant is given a list containing two sets of items. One set is collected individually, and the other must be collected as a team. In addition, each participant is given a limited amount of virtual currency, and a set of rules that must be followed. Seen below is a screenshot of the TMET Shopping Environment. 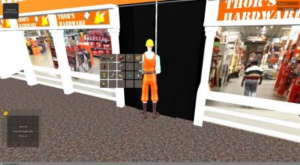 Intelligent tutoring systems are an evolving way of providing an effective, low-cost, simulated environment where performance can be easily monitored and feedback can be offered in real-time. By extending these systems to work in a group environment, teamwork and communication can be easily evaluated and improved under the direction of an intelligent tutor.